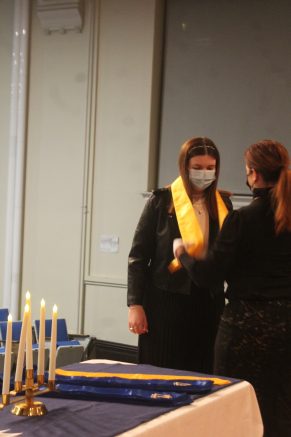 Nineteen Mount Mercy seniors were formally inducted into the McAuley Chapter of the National Honor Society.

The Mount Mercy Academy Women in Social Science Academy continued its virtual field trips this past week. The group hosted one of its own, 2008 graduate Allyssa Fuller Olsen. Olsen is currently the health center administrator at Fox Run in Orchard Park, supervising over 120 employees. She has a master’s degree in social work for the University at Buffalo, as well as a long-term care certificate from D’Youville College. She has held various positions throughout Western New York and she highlighted key points about her career and experiences as a social worker for the students who attended her presentation.

Nineteen Mount Mercy seniors were formally inducted into the McAuley Chapter of the National Honor Society. The induction had been scheduled for last April but was postponed due to the pandemic. Seven students from Buffalo were tapped for membership: Kathryn Bednarz, Emma Lewis, Madeline Lickfeld, Megan Reilly, Mary Snyder, Victoria Trzaska and Hannah Vattes.

Selection into the National Honor Society is based on scholarship, service, character and leadership.

Latin language is not dead at Mount Mercy Academy