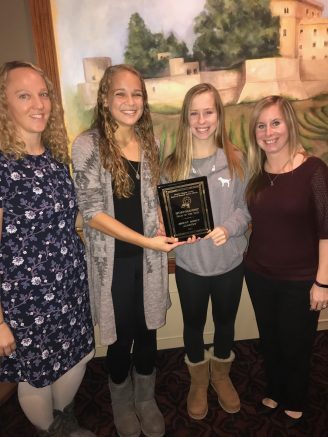 The 2016 Mount Mercy Magic Varsity Soccer Team was named the winner of the 2017 Soccer Officials Sportsmanship Award. The Sportsmanship Award is given to the girls’ soccer team in Western New York that exhibits the best sportsmanship throughout the season. All schools, both private and public, are considered for this honor.

The award is selected based on a vote of the members of the Western New York Girls’ Soccer Officials.

Principal Margaret Staszak was very pleased by the team’s recognition. “I am so proud of our soccer team for receiving the Sportsmanship Award. We know that it’s easy to be a good winner, but to lose with grace is an even more important a lesson for our players. I am proud of all our students for demonstrating kindness and compassion in so many ways, but to be recognized for exhibiting civility and politeness is extremely validating of what we teach at Mount Mercy,” Staszak stated.

Coach Myers said, “The Sportsmanship Award is a great honor and we owe it to our captains on the team, Abby Hillery, Alesia Hamm and Mariah Rullan. These young ladies set the tone from day one for the rest of the team through their leadership. They respect their coaches, their teammates, opposing players and referees. Mount Mercy is lucky to have them as representatives of the school.”

Mount Mercy finished its season with a 9-8-2 overall record.