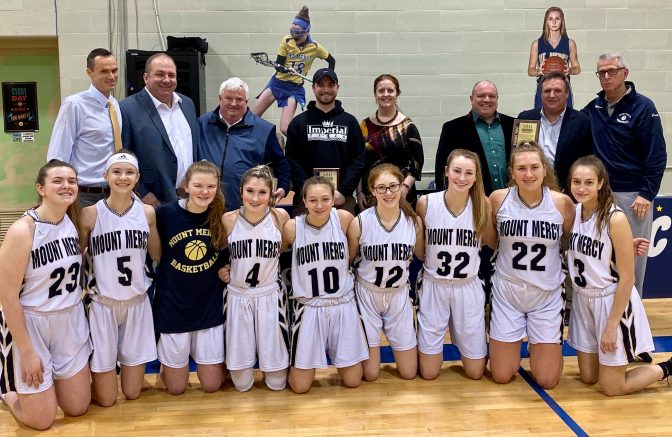 At a recent Mount Mercy Academy Varsity Basketball game, the Mount Mercy Academy Athletic Boosters thanked and acknowledged several local businesses.  For the past several years these generous community members have supported the boosters in their efforts to assist the Magic Athletic program. Through the contributions of the merchants and the booster club, many enhancements have been made.

Honored by the boosters were Matt Burke of Burkey’s Sports Ware, Dave Powers of Imperial Pizza, Mike Burns of Adolph’s Old First Ward Tavern, Tommy Cowan of Doc Sullivans, Pat Reid and Mike Bean of Potters Field and John Ashe. These individuals and their businesses have been longtime friends of the Mount Mercy Academy Athletic Department. They have supported the concessions at the volleyball and basketball games and have provided prizes for the booster club-sponsored Trivia Night and other group fundraisers.

The booster club, thanks in part to these merchants, have provided new uniforms for four of the athletic teams; equipment for three other teams; repaired, repainted and refinished the gymnasium floor; and provided a sound system and new banners for the gym.

Booster club members Bob Hughes and Mike Lempko presented plaques to the donors as a token of appreciation for their support.