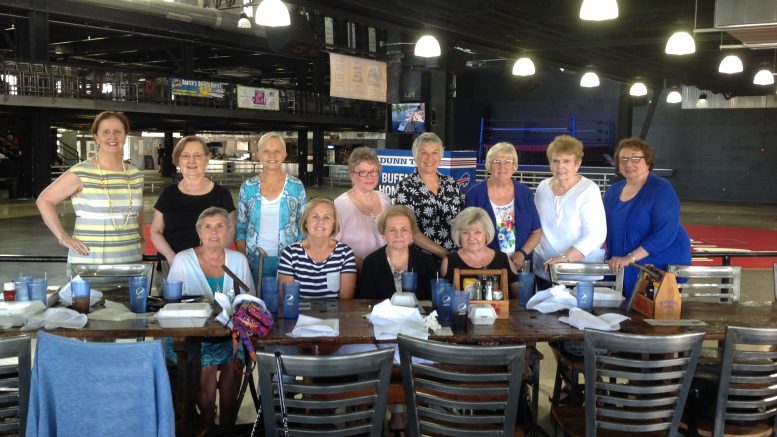 Currently on the Mount Mercy Academy website it states, “Become a Mercy girl and make friendships that will truly last a lifetime.” Another slogan for the school has been “Mercy Girls for Life.” A group of 1961 graduates are living proof that these maxims are true. Although these alumnae had attended reunions in the past, the group decided after their 45th reunion they needed something more, so these women began meeting about once a month and have been doing so for over eight years.

In May of 2009 the women, who had comprised the planning committee for the 45th reunion of the Class of 1961, were having breakfast when as it often does when Mercy girls get together, talk turned to classmates. Peggy Crotty Kelly, Marge Pinto Meyer, Sandy DeVinney Mineo, Arline Schwartz Engasser, Kathy McGee Pierce and a few others were chatting about classmates, when Kathy Pierce said she had run into Vincy Ventresca O’Donnell and maybe she would like to join them for breakfast. Peggy Kelly encouraged her to ask and that began the years of lunches and dinners. Ironically, this group never really had their 45th reunion because it was scheduled during the infamous October Storm of 2006. It is apparent that this group does not need a formal reason to have a reunion of friends and classmates.

In 2011, the Class of 1961 held their 50th reunion and many of the women on the organizing committee were part of the unofficial group that began in 2009. The women also had a 55-year reunion last year that was well attended and included several classmates who had moved out of state.

As the months passed, the gatherings increased in number by a classmate or two.  Members of the initial group would invite classmates that they came into contact with and gradually a database of email addresses began to grow. Notices of future gatherings would be sent out to all the women whose email addresses were known.  Currently there are 70 women who receive notices of the get-togethers and other email communications.

With interest and attendance in the meals growing, the group decided to set an official meeting time. The second Wednesday of the month is the time that is set aside for the “Mercy Girls” to meet to eat, laugh and talk. There are a plethora of family restaurants to choose from, so it is never difficult to find somewhere to meet. The group prefers to be by the water when it is nice, so they can often be found by the lake or the river in the spring and summer. The only prerequisites for selection is being able to accommodate the group no matter how large it might be that month, and the restaurant must allow the group time to linger after lunch until it is time for the facility to set up for dinner.

An email is sent out to everyone on the list and then reservations are made … and then the fun begins. The number of attendees varies from 10 to 26. Classmates from out of town make an effort to attend when they are back in the area for a visit.

After every lunch Vincy O’Donnell writes a little recap of who was there, what they talked about, who wants prayers, if someone is sick among their classmates and any other pertinent information. O’Donnell tries to keep the emails upbeat and funny. She commented that the recipients love it and they look forward to the recap and photos she sends every month by email on the day of the lunch. O’Donnell has a three-ring binder that is full of those recaps, all eight-plus years of them!

After so many years people, interests and shared experiences are bound to change and often people who were once friends lose touch. However, the common denominator of Mount Mercy Academy and the experiences shared while there keep this group connected.

“What we have in common is Mount Mercy Academy, the four years we spent there, the friendships we forged there and the values we lived then and now. This new grouping finds us with much in common … careers, children, grandchildren, retirement, illness, death of loved ones and sadly even the deaths of some of our classmates,” O’Donnell commented.

The classmates have traveled down varied paths since they walked the halls of Mount Mercy Academy together. Some have worked in business, nursing, education, social work and raising families. Many are helping raise their grandchildren. Despite these different experiences, the bonds remain strong.

O’Donnell elaborated, “No matter what we did for the 40 or so years after graduation from the Mount, we were able to pick up where we left off the last time we saw each other. That is a special credit we owe to MMA and, of course, our families. Our bonds are special and precious, and we intend to keep strengthening them for as long as we are able. And, when the day comes that we are not able, we will have a bus drive around to the various nursing homes to gather us again!”

As the years have passed by, the members of the Class of 1961 have reformed and strengthened their bonds. “In these past eight plus years, we’ve come to know each other again … and better! We still have our high school memories, but now we are adding more current moments. We haven’t traveled together yet, but we talk about it,” O’Donnell concluded.

In 1957 the Mount Mercy Class of 1961 became Mercy girls and these women truly made friendships that have lasted throughout their lifetimes.

Mount Mercy teaches the past to impact the future