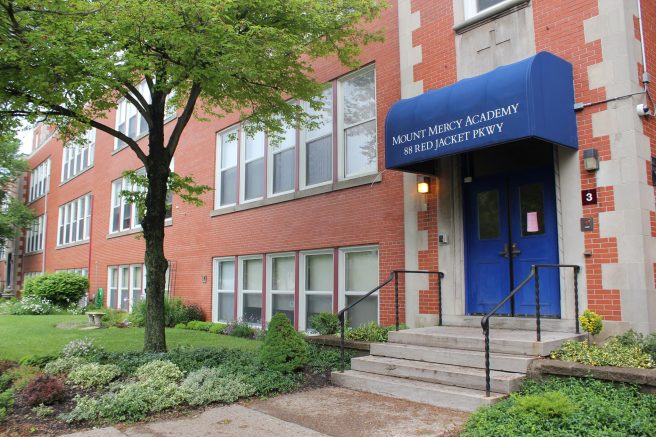 Mount Mercy Academy’s Guidance Department recently announced the members of the junior class who were awarded scholarships to specific colleges.

Mount Mercy Academy’s Guidance Department recently announced the members of the junior class who were awarded scholarships to specific colleges. The students will be awarded a scholarship to that college, contingent on the student’s attendance at that school.  Nominations are based on numerous factors such as academic achievements, leadership qualities, community involvement and standardized test scores, as well as faculty recommendations.

The University of Rochester’s George Eastman Kodak Young Leaders Award was presented to Angelina Larivey of Lackawanna. The award is given to a junior who displays strong leadership skills, is receiving excellent grades in a challenging curriculum, and participates in and shows dedication to varied, extensive and time-consuming extracurricular activities.

Gianna Lauciello of Orchard Park was given the University of Rochester’s Xerox Award for Innovative and Information Technology. The award is presented in recognition of outstanding achievement in the pursuit of innovative approaches and an appreciation for the possibilities of technology.

The University of Rochester’s Bausch & Lomb Honorary Science Award was awarded to Emily Kessler of West Seneca. The award is presented to a student for her outstanding academic achievement and superior intellectual promise in the field of science.

Emily Rhoads of Orchard Park was the recipient of the University of Rochester’s Frederick Douglass & Susan B. Anthony Award in Humanities and the Social Sciences. This award recognizes a student who demonstrates a commitment to understanding and addressing difficult social issues and is dedicated to continuing her unfinished life’s work.  Equal emphasis on study, community action and dialogue is encouraged.

Rheanna Welsh of Lackawanna was honored with the Rochester Institute of Technology’s Computing Medal Award. The award is given to a high school junior based on her accomplishments as a student, her involvement as a member of the school and community and her commendable computing abilities.

The Rochester Institute of Technology also recognizes a student who has not only attained outstanding academic achievement, but has also shown exceptional creativity and innovation in doing so. Claire Mullen of Orchard Park received this award.

The Niagara University St. Vincent de Paul Medal is awarded to a student who exhibits compassion for peers, initiative, empathy for those less fortunate, humility, and leadership in the community. This year’s medal recipient was Megan Reilly of Buffalo.

Hannah Vattes of Buffalo was given the St. Michael’s College Book Award. St. Michael’s College in Colchester, Vermont, grants this award to a student who has demonstrated a sustained and sincere commitment to scholarship, volunteerism and leadership within her community. It recognizes an individual who believes in serving others as an extension of her Catholic faith.

The Elmira College Key award was presented to Emma Lewis of Buffalo in recognition of exceptional scholastic achievement, leadership, citizenship and participation in extracurricular activities. This individual excels in all areas, is a true role model and exhibits qualities which may be seen as the “key” to success.

The Randolph College Book Award was awarded to Lara Groves of Lakeview based on her achievements in academic excellence and her leadership potential.

Keuka College’s George H. Ball Community Achievement Award was given to Victoria Trzaska of Buffalo, a student who has qualities that embody the values of Keuka College, including integrity, academic excellence, diversity, leadership, service and social responsibility.

Rensselaer Polytechnic Institute in Troy awards their Rensselaer Medal to a student who excels in advanced math and science courses and exhibits significant interest and involvement in extracurricular activities. This year the medal was awarded to Madeline Lickfeld of Buffalo.

Wells College in Aurora awards their 21st Century Leadership Award to students who embody the spirit of sincerity and intellectual qualities of a strong leader in her school and community activities. Katherine Bednarz of Buffalo has demonstrated superior integrity, trustworthiness, self-confidence and intellect, while possessing the characteristics of the highest form of ethical leadership.

Chatham University in Pittsburgh offers their Rachel Carson Healthy Planet Award and Scholarship to a high school junior who shows leadership and passion for sustainability and the environment, social justice and policy studies, or an interest in writing and the sciences.  The scholarship was given to Catherine Zak of Hamburg.

The LeMoyne College Heights Award recognizes a high school junior who is “reaching for the heights” in the classroom and in service to her school and community. This award is intended to help promote and recognize academic achievement, service and leadership, which are important aspect of the tradition at LeMoyne College. Olivia Jarosz of West Seneca received this award.

Mary Snyder of Buffalo received the Russell Sage College Student Sage Award that recognizes the characteristics of academic excellence, student leadership and community involvement that define a woman of influence. This individual is an academic and social leader, possesses powerful communication skills and leads debate on critical issues. She is motivated to serve and inspires others to develop and grow.