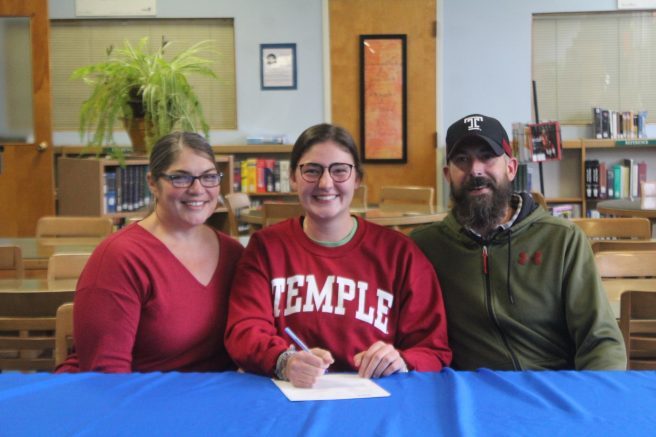 There are plenty of stories about athletes who are successful in their sports who instantly fell in love with their sport. They couldn’t wait to practice and participate. Instant love was far from what Mount Mercy senior Chloe McHugh-Freedenberg felt about rowing. However, as time passed, McHugh-Freedenberg learned to love the sport and that love has been parlayed into a full scholarship for rowing. McHugh–Freedenberg recently signed her letter of intent to accept a rowing scholarship to Temple University.

Her cousin was a coach for the West Side Rowing Club and her mother thought that rowing would be a good activity for her daughter, so McHugh-Freedenberg began rowing in middle school. “I was terrified of the boats and the water and never wanted go back. This caused me to cry almost every day. However, my mom refused to let me quit, making me realize later on that rowing was the sport for me,” McHugh-Freedenberg stated.

She has been rowing since middle school, starting in the summers before high school and then joined the junior women’s team for the Buffalo Scholastic Rowing Association (BSRA) as a freshman. McHugh-Freedenberg has competed in numerous regattas and competitions in the past few years, but cites the races when she was the stroke seat of the Northeast under 18 quad and under 18 four boat that won gold at the Olympic Development Program Cup as her proudest moments. She was also a part of the under 18 eight boat which earned a silver medal. McHugh-Freedenberg was invited to represent the Northeast region as part of a team of 28 girls. They raced against girls from all over the country at Nathan Benderson Park in Sarasota, Florida.

Another proud moment related to rowing came when she signed her letter of intent to accept a scholarship to Temple University. Although she did receive other scholarship offers, McHugh-Freedenberg believes that Temple is the best choice for her.

“I feel that the endless academic and athletic opportunities that are provided at Temple are a major factor in my decision to attend Temple next year. The strong community at Temple was also an important consideration in my decision,” she stated.

McHugh-Freedenberg plans on majoring in both Early Childhood Education and Special Education. An honor student, McAuley Scholar and a member of National Honor Society at Mount Mercy, McHugh-Freedenberg is quite capable of successfully obtaining the double major. She then hopes after graduation to travel to third world countries in order to teach those who do have an opportunity to obtain a proper education.

Rowing is a strenuous sport with demanding practices and workouts. A typical practice and workout involve running, erg workouts (a rowing machine that focuses on upper and lower body muscles to increase cardiovascular endurance) that focus on either technique or endurance and race pace workouts. Water practices often involve drills that allow rowers to work on the technical aspects of the stroke or high-intensity pieces that focus on what would happen during an actual race.

The winter is obviously a down time for races, but the work continues for dedicated rowers.   The winter schedule is full of normal winter training practices as the team works toward the New York State Rowing Championships. This spring race is held in Saratoga, where teams from all over the state compete in order to go to Nationals.

It is quite obvious that McHugh-Freedenberg has progressed quite a long way from the scared middle school student to a scholarship winner. Her initial fears have been replaced by a prodigious love of rowing.

“My favorite thing about rowing is that it allows me to form so many great bonds and friendships with my teammates,” McHugh-Freedenberg commented. “I also love the feeling of being on the water and feeling the water move under the boat when I row.”

Just recently McHugh-Freedenberg returned to Florida to attend the U.S. Rowing Youth Regional Challenge. This was a continuation of the Olympic Development Program. The trip consisted of two practice days and two days of racing. She raced against girls from all over the country in an under 18 pair and a under 18 four. McHugh-Freedenberg was representing the Southwest region during this program because they were in need of more athletes to fill their roster.

With her skill, dedication and determination, the sky is the limit for McHugh-Freedenberg’s future in rowing.

Mount Mercy alumna continues to serve others at home and abroad