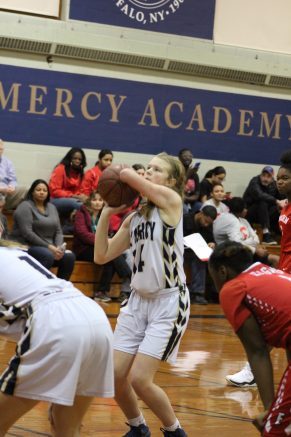 It is not extremely common for a high school freshman to play three sports, including two varsity sports. It is even less common for that athlete to compete at a high level with only one full arm.  Mount Mercy Academy freshman Mya Wood of Blasdell has done just that. She is a starter on varsity soccer, was the top scorer on JV basketball and was called up to varsity for the playoffs, and she will be a starter in lacrosse. Wood has accomplished all of this despite only having a complete right arm.

Wood began her athletic career at the age of four when she began playing soccer. She credits a desire to be like her athletic siblings as the impetus to her athletic pursuits.

“I’ve always looked up to my siblings, who were all very athletic so I wanted to follow in their footsteps,“ Wood said. “It was my decision to play. My parents did not push me, but they encouraged me.”

In addition to soccer, Wood also played basketball when she was younger.  She began playing in fifth grade. “My family has always encouraged me to play sports. I was nervous to play basketball when I started but my mom talked to my sister’s old coach, Erin Ryan (Mount Mercy’s financial aid and payroll coordinator), and she really encouraged me to play. She was my first coach and she was amazing and didn’t treat me differently than any other player. She always pushed me to try harder and believe in myself,” Wood remarked. Partially due to that encouragement and support from Ryan, basketball has become Wood’s favorite sport.

When Wood was younger, she said that other competitors used to stare at her, but she never let that bother her. As she grew older, no one seemed to be fazed by it, as older students realize that everyone is different.

Although she has achieved success in athletics and school, it has not always been easy for Wood. “My lack of two complete arms has impacted my life greatly. I have had to learn how to do things differently like tie my shoe, peel an orange, or even open a piece of candy. It was difficult for me when I was younger to dress myself and put on socks,” Wood recalled. “Over the years I have mastered the art of putting a ponytail in my hair with one hand, something many girls my age take for granted. It has impacted my athletic career but I always learn how to do things my own way.” She has developed the strength in her right hand to help compensate for the lack of a left hand.

Wood believes that her soccer opponents treat her respectfully and fairly, but she does find it difficult to do throw-ins. In basketball she believes that her opponents exploit her left side weakness but she uses this as motivation to work harder. She also struggles with ball handling because she cannot make the same moves as everyone else, but she works hard to do the best that she can.

Mount Mercy assistant soccer coach Mary Colby believes that Wood is a tough competitor. “She plays with heart and intensity and is not afraid of physical contact,” Colby commented.

Peter Krug, Mount Mercy’s JV basketball coach, attests to Wood’s work ethic. “When Mya was on the floor I knew that she would never give up on a play in the defensive end. She would always make people either adjust their shots or block them out of bounds. I think that Mya works harder than most people because of her arm, but by doing this it will get Mya farther in life and not have her sit in the back row watching everything go by her. She was such a joy to coach and I always loved her competitive nature,” Krug stated.

Although she tries to keep a positive attitude, Wood does become frustrated from time to time. She never thinks about giving up, however, because she loves playing sports. She channels this frustration into pushing herself even more to improve.

Wood has proven to be a fun and encouraging teammate who inspires her teammates and coaches. She does not seem to let anything bother her. “Mya has a great sense of humor; her quick wit provided many laughs,” Colby stated. “Mya’s energy and enthusiasm boosted team spirit throughout the season.”

One thing that does bother Wood is if people try to do things for her or feel sorry for her. “I don’t really understand why they feel sorry for me. I can do everything anyone else can, maybe just a little differently,” Wood commented. “I am very independent and really don’t like when people try to help me. I would rather try something on my own before I ask someone for help.”

One of the highlights of Wood’s athletic career at Mount Mercy is being called up to the varsity basketball team for the Monsignor Martin League playoffs. “I wanted it so bad, so I worked very hard throughout the season. I even told my family we could not go on vacation because I did not want to miss out on the opportunity,” Wood stated. “Even during the short time I played with varsity, they taught me a lot. Coach John Glose and the team were very welcoming and I really enjoyed playing with all of them.”

Wood intends to go to college and hopes to play one of her sports in college. After seeing how far she has come, don’t bet against seeing her reach this goal.