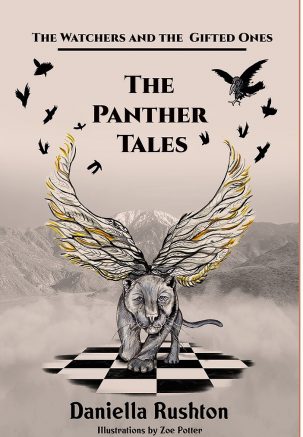 The Watchers and the Gifted Ones will be available for purchase beginning Dec. 1.

The Panther Tales: The Watchers and the Gifted Ones, Book 1, is the latest release from Buffalo-based NFB Publishing.

Written by Daniella Rushton and illustrated by Zoe Potter, The Watchers and the Gifted Ones tells the story of a teenage girl, Hannah, who befriends a panther while discovering she possesses an extraordinary imaginative gift. Dark forces, however, are waiting and watching to destroy Hannah’s happiness. All she needs to do is to believe in herself and a panther called Parky!

The author studied at The London College of Fashion in the early 1990s, passing with distinction. Upon marrying Nicholas Rushton in 1997, she moved home and began her married life, raising a family and working in a family business overseeing marketing campaigns.

In later years, Rushton resumed her creative career and began studying acting at The Birmingham School of Acting. This led to many supporting television roles as well as stage and voiceover work.

Later, the family purchased a vacation home in the United States and began splitting their time between the U.S. and UK. In 2017, challenged by her son, she began writing. Her first novel was published in Scotland in June 2020 and the second edition will be published in USA in December.

Her passion and newfound gift for writing has boosted an already Christian faith. Rushton has since been asked, very recently, to be a speaker at CW3 Confidence in California for 2021, a women, wealth and wellness summit created for the empowerment of women. Furthermore, she has been invited to write for Illuminations Fantastic magazine in Tennessee in 2021. She also continues her work on The Panther Tales along with busying herself with her dog Walter, family and friends.

The Watchers and the Gifted Ones will be available for purchase beginning Dec. 1. For more information on NFB Publishing, please visit nfbpublishing.com.

NFB Publishing releases The Adventures of Sticky McGooey and Friends