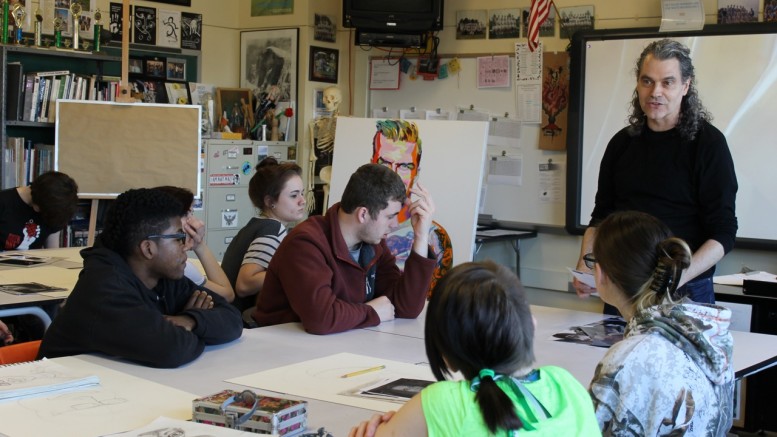 St. Patrick’s Day was a lucky one for the Academy of Visual Arts students at West Seneca West Senior High School as they had a special visit with illustrator/painter Phillip Burke.

Their connection to Burke started in September, when his artwork was on display at the Burchfield Penney Art Center in Buffalo. Over 40 sophomore and junior students took a field trip to the art center, as well as the Albright-Knox Art Gallery, and were floored by Burke’s exhibit.

The students learned Burke would be at the Burchfield the following night for a closing celebration and signing. Many of the academy kids decided to attend and introduce themselves to the internationally-exhibiting artist.

Christopher Galley, West’s art teacher, said he spoke with Burke that night and told him how his students are currently working on a portrait project based on his style. “He was interested in coming to see that,” Galley said. After going back and forth via email, a date was finally selected and a visit was planned.

Burke visited Galley’s junior Academy of Visual Arts class around 11 a.m. Thursday, March 17. He started his visit with a presentation on his step-by-step process on how he creates his paintings. To give the over 20 students in attendance a visual, Burke displayed photos and sketches as well as a 5- by 4-foot painting he created of soccer star David Beckham.

Not only did the presentation grab the attention of the academy students, but Superintendent Dr. Mark J. Crawford, his secretary Melissa Schutrum, West Principal Jay Brinker and Assistant Principal Dana McManus and a handful of teachers stopped by to learn about his process. “It was great to see so much support from the school district,” Galley said.

After his presentation, Burke went to each and every student in the room to get to know them and see their drawings. “The kids got wide eyed and a little bit nervous,” Galley said. “He went around and talked with each kid and did some drawings for at least 10 minutes per kid.”

Burke, who is originally from Buffalo and lived in New York City for a number of years before moving back, stayed after school until about 3:30 p.m. giving advice, signing autographs and taking photos.

“He was incredibly generous with his time and was frankly the best prepared artist I’ve had come in and talk to my class,” said Galley, who tries to bring in a guest artist every year. “They were very excited and very enamored with him and his work and how much time he took to connect with them.”

Typically when Burke visits a class, it’s at the college level and he charges the school for his time. For West, he visited for free because he was impressed with the skill and interest of the students.

“He said the big reason he came is because the kids from West Seneca were so genuine and interested and direct going right to him during the signing,” Galley shared. “That made an impression on him. When he came here, six months later, he still remembered kids by name. This is something the kids will remember for the rest of their lives.”

The students are about halfway through their portrait project, and Burke asked for Galley to send him photos of the artwork when they are done so he can see the final outcome.

The artwork will be on display at the school, but some of the pieces may end up on display at the District Art Show taking place from April 20 to May 11 at Karpeles Manuscript Library Museum, 453 Porter Ave., Buffalo. The show includes the collaborative works of students from grades K-12 from all of the schools in the West Seneca Central School District.

Students take part in Girls on the Run program