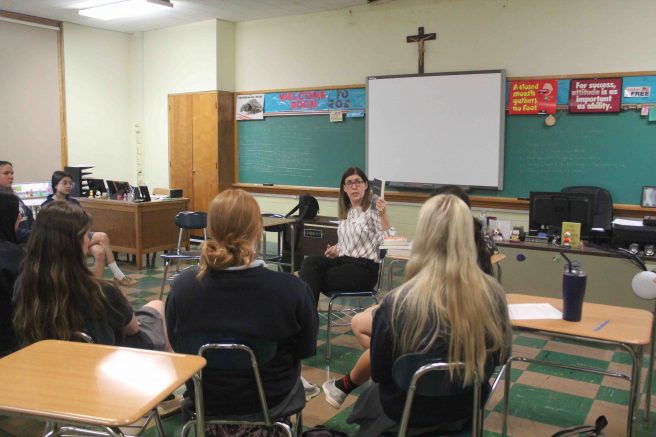 Redmond spoke to the class about her path as an author, mentioning that she did not begin pursuing her dream until after she had retired from her job with the Buffalo Police Department. She had always wanted to be a writer but did not follow her dream until later in life. Junior Vayana Stoyanova of Gowanda noted, “Mrs. Redmond showed us that it is never too late to follow your dreams and it is important to always follow your passions.”

Redmond told the class that the path will not be smooth, nor will it always be easy or without setbacks and disappointments. She mentioned that she had several rejections before her novels were accepted for publication.

Students were impressed with Redmond’s persistence and willingness to keep putting herself out there, exposing herself to disappointment. “Mrs. Redmond was very motivating and inspired me to keep pushing past my doubts, no matter what the outcome,” stated senior Kennedy Cerrone of Orchard Park.

Some of the advice that Redmond had for the students included to begin assembling a writer’s toolkit and to keep reading all types of genres. She had several different writing books and materials that she brought to show the class. The students were also able to ask questions and they appreciated the opportunity to listen to Redmond’s advice.

With several seniors in the class who are searching for colleges and majors, they found listening to Redmond’s life experiences to be beneficial. “I found Mrs. Redmond’s message to be very encouraging and it was comforting to hear about her career and know that the right path will always follow you,” commented senior Mallory Chase of Buffalo.