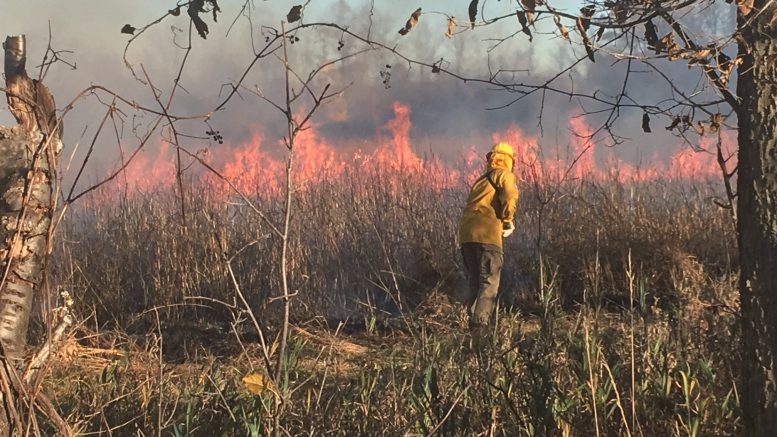 The Western New York Land Conservancy conducted a prescribed burn on Nov. 7 at the Niagara Escarpment Preserve on Leete Road in Lockport. The preserve contains a beautiful 10-acre grassland — one of the most threatened natural communities in New York State. This grassland is very healthy and brimming with tall native grasses, giving wildlife a place to hide, eat, rest and nest. One of the best ways to keep a grassland healthy is to burn it periodically.

“Fire is a natural tool to maintain grasslands,” said Dave Paradowski, Regional Forester with the New York State Department of Environmental Conservation (DEC). “Properly executed, periodic, prescribed fire can help prevent the invasion of shrubs and trees and maintain the edge effect along adjoining woodlands and hedgerows. It also helps clear out undesirable, invasive species of plants and insects, increases the availability of nutrients in the soil, and stimulates growth of grasses and perennials. Fire is surprisingly good for these plants and the wildlife that depend on grassland habitat.”

Taking a lesson from nature, humans have used fire as a land management tool for centuries. Farmers use fire to revitalize pastures and maintain hedgerows. Forest managers use fire to reduce the risk of uncontrolled wildfires and promote the growth of desirable tree species. Wildlife managers use fire to keep grasslands open for the birds and animals that rely on them for their survival. When used in a controlled way, fire is a very useful, cost-effective and safe land management tool. When humans suppress wildfires, we inadvertently harm entire ecosystems dependent on fire. The Land Conservancy’s prescribed burn will support the health of the Niagara Escarpment Preserve grassland.

“Grasslands serve as nesting habitat for many species of birds, including rare and threatened species such as the Upland Sandpiper and the Henslow’s Sparrow,” said Loren Smith of Buffalo Audubon. “This is an exciting step toward showing the community that fire is a safe and effective tool for improving habitat. I hope this will help clear the way for other organizations to use fire to help maintain other nature preserves and parkland in our region.”

The Niagara Escarpment Preserve burn is the first prescribed burn to be done in Niagara County and was run by Applied Ecological Services (AES), a company that has been conducting safe and successful prescribed burns for over 20 years. AES developed a burn plan specifically for the Niagara Escarpment Preserve that was reviewed and approved by the New York State Department of Environmental Conservation Forestry Division before the burn was conducted.

“Unlike an incidental wildfire, a prescribed burn requires very specific weather conditions,” said Ben Zimmerman of AES. “We had to wait until the wind direction and speed, temperature and humidity were just right before we were able to conduct the burn.” Volunteer firefighters from the Olcott and Wright’s Corners Fire Companies provided backup at the burn.

Following the prescribed burn, the grassland portion of the preserve will be reseeded with native wildflowers like asters, turtlehead, anemones, penstemon, lobelia, blue vervain, blazing star and bee balm.

The prescribed burn at the Niagara Escarpment Preserve was made possible thanks to grant funding from the U.S. Fish and Wildlife Service. A grant from the Yahoo Community Benefit Fund and Community Foundation for Greater Buffalo will fund the native wildflower seeds and planting.