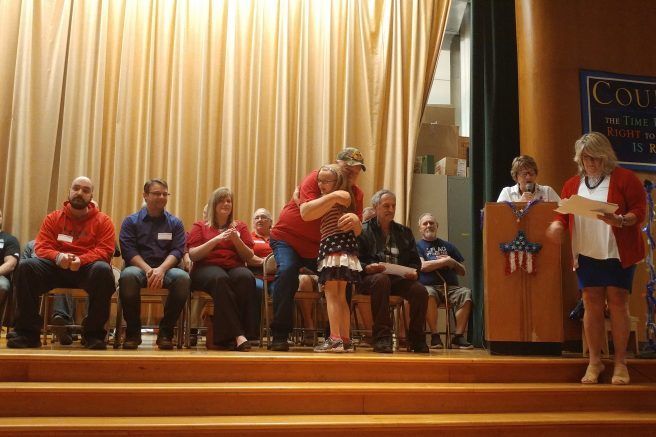 A Memorial Day ceremony was held at Winchester Elementary School in West Seneca.

Honor was the theme echoing through the hallways at Winchester Elementary School in West Seneca the morning of Thursday, May 24, as the grades 1-5 school welcomed members of the military for a Memorial Day ceremony.

Students were asked to invite loved ones to the ceremony to be recognized, and the school was thrilled to have members of the Army, Navy, Air Force and Marines in attendance. The event’s master of ceremonies was Nurse Cindy Rustowicz, who was filled with joy when she saw her son, Ray, who is in the Army Reserves, sitting in the audience with his family.

Rustowicz, a Blue Star Mother, explained her background growing up in a military family and how Memorial Day is our way as a nation to remember all who lost their lives fighting for our freedoms and give thanks to those who are continuing to fight each and every day.

She also spoke of the fifth grade service learning project, which impacted the VA Hospital. Students created PowerPoint presentations and spoke to first, second and third grade classrooms about why we celebrate Memorial Day. The school also made a donation to Loan Project and raised over $350.

As they visited the VA Hospital, Rustowicz had the opportunity to get to know Ann Davis, a Gold Star Mother. Davis lost her son, Nathaniel, in April 1989 while serving in the Navy. She stepped onto the stage to share her story, honor her son and offer ways people can give back. “I appreciate everything Winchester has done to help our veterans,” she said.

Before the ceremony concluded, Principal Tracy Spagnolo invited Rustowicz’s family to the stage to thank her for her many years of caring for students. In return, Rustowicz, who will retire at the end of the school year, presented the school with a certificate and a flag that was flown in the school’s honor.

Be the first to comment on "Remembering our fallen soldiers"