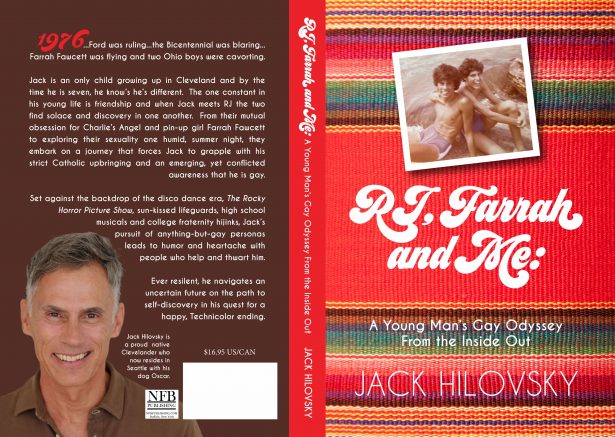 RJ, Farrah and Me is the latest release from NFB Publishing.

RJ, Farrah and Me: A Young Man’s Gay Odyssey From the Inside Out by author Jack Hilovsky, is the latest release from Buffalo-based NFB Publishing.

The year is 1976. Gerald Ford was ruling, the Bicentennial was blaring, Farrah Fawcett was flying and two Ohio boys were cavorting. Jack is an only child growing up in Cleveland and by the time he is seven, he knows he’s different. The one constant in his young life is friendship and when Jack meets RJ the two find solace and discovery in one another. From their mutual obsession for Charlie’s Angel and pin-up girl Farrah Fawcett to exploring their sexuality one humid, summer night, they embark on a journey that forces Jack to grapple with his strict Catholic upbringing and an emerging, yet conflicted awareness that he is gay.

Set against the backdrop of the disco dance era, The Rocky Horror Picture Show, sun-kissed lifeguards, high school musicals and college fraternity hijinks, Jack’s pursuit of anything-but-gay personas leads to humor and heartache with people who help and thwart him. Ever resilient, he navigates an uncertain future on the path to self-discovery in his quest for a happy, Technicolor ending

Hilovsky, a native of Cleveland, now resides in Seattle.

Founded by Mark Pogodzinski, NFB Publishing is a member of the Association of American Publishers. For more information, please visit nfbpublishing.com or call (716) 510-0520.

NFB Publishing releases book one of The Panther Tales

Be the first to comment on "RJ, Farrah and Me is the latest release from NFB Publishing"