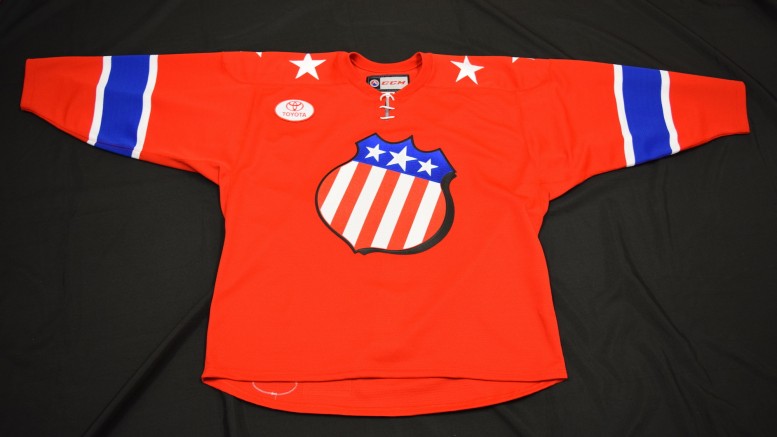 The Rochester Americans have unveiled the special-edition jerseys that will be worn for the team’s 60th anniversary game to be played on Friday, Jan. 8 versus the Hershey Bears at The Blue Cross Arena.

The Amerks will wear a sweater inspired by one worn during the team’s first Calder Cup championship season of 1964-65. The red jerseys feature the classic stars and stripes shield on the front outlined in black, with a thicker black border on the right side to create a shadow effect. There are also six white stars on the shoulders, with three on each side, symbolic of Rochester’s six Calder Cup championships. Each arm features a thick royal blue stripe with a thinner white band at the top and bottom. There is also a white lace-up neck.

Rochester defeated Hershey four games to one to capture its first Calder Cup back in 1965. Today, the Amerks and Bears remain the longest-tenured teams in the American Hockey League. The Jan. 8 game will mark the 450th all-time regular season meeting between the two iconic clubs.

Replica 60th anniversary throwback jerseys are available for sale in the Amerks Team Store presented by ADPRO Sports at The Blue Cross Arena. The Amerks Team Store is open Monday through Friday from 11 a.m. to 3 p.m. and all game days until the conclusion of the game.

Additional details regarding the 60th anniversary celebration on Jan. 8 will be announced in the near future. For more information or to purchase tickets to an Amerks game, visit www.amerks.com or call 1-855-GO-AMERKS.

Amerks inducting Domenic Pittis into Hall of Fame in January