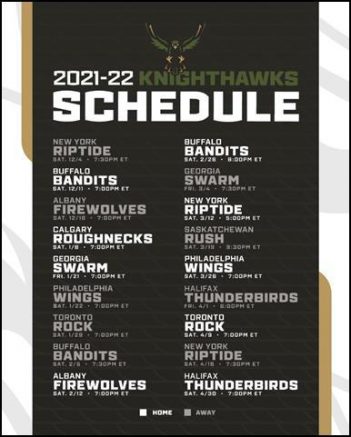 The team’s busiest months are January, March and April with four games each.

The Rochester Knighthawks recently announced their schedule for the 2021-22 National Lacrosse League regular season. The Knighthawks are slated to open their second NLL campaign on Saturday, Dec. 4 at 7:30 p.m. when they visit the New York Riptide as part of the league’s Face Off Weekend.

The Knighthawks, who will play in the NLL’s Eastern Conference this coming season, will play only nine of the 14 teams in 2021-22, including every team in their respective conference at least twice as part of their 18-game (nine home, nine road) regular season schedule. Rochester will be joined in the Eastern Conference by the Albany FireWolves, Buffalo Bandits, Georgia Swarm, Halifax Thunderbirds, New York Riptide, Philadelphia Wings and Toronto Rock.

Rochester will have three matchups each against intrastate rivals Buffalo and New York, while also having a pair of contests (one home, one road) against Albany, Georgia, Halifax, Philadelphia and Toronto. The remainder of the Knighthawks’ schedule feature single meetings with Calgary and Saskatchewan.

After opening the season on the road on Long Island, the team returns home to host the Bandits in its 2021-22 Home Opener on Saturday, Dec. 11 at Segar & Sciortino Field at The Blue Cross Arena.

Rochester gets its first look at the Albany FireWolves, one of the NLL’s newest franchises, on Dec. 18 in the final game prior to the Christmas break. The Knighthawks will then play two of their first five games of the New Year at home, beginning with a matchup against the most recent NLL champion Calgary Roughnecks on Saturday, Jan. 8, followed by the lone visit from Georgia on Friday, Jan. 21.

The Knighthawks’ longest road trip of the season is a three-game trek from Jan. 22 to Feb. 5 with stops in Philadelphia, Toronto and Buffalo, marking the team’s only visit to KeyBank Center this season. The longest homestand is two games, which happens on two different occasions in January and February, respectively.

Rochester’s lone trip out to Western Canada comes on Saturday, March 12 when they take on the Saskatchewan Rush in the only get-together of the season between the two teams.

The Knighthawks will play all but one of their home games on Saturday nights except for Friday, Jan. 21 against Georgia. Additionally, seven of the nine games will have 7 p.m. starts except for Saturday, Feb. 26 against Buffalo, which will commence at 8 p.m. to accommodate the Rochester Americans’ American Hockey League matchup earlier in the day, and a 5 p.m. contest against the Riptide scheduled for Saturday, March 12.

The team’s busiest months are January, March and April with four games each.

The on-sale date for all Knighthawks single-game tickets will be announced in the coming weeks. Season tickets for the Knighthawks for the 2021-22 season are on sale now and start as low as $17 per seat per game. More information on Knighthawks season tickets can be found at https://rochesterknighthawks.com/tickets/season-tickets/.