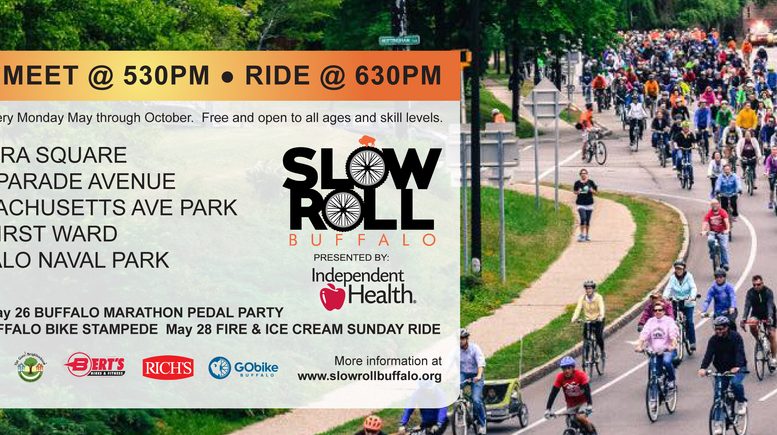 Slow Roll Buffalo will start its third season in Niagara Square on Monday, May 1, kicking off six months of Monday night community bike rides that have a total attendance of more than 50,000 to date.

The basic structure of Slow Roll will be the same – beginning at 6:30 p.m., an approximately 10- to 12-mile roundtrip ride, free and open to cyclists of all ages and skill levels, each week a new route guided by 100+ volunteers and ending with an after-party featuring food, drinks and live entertainment. 2017 will see new ride hosts including East Parade Avenue (May 8), Massachusetts Avenue Park (May 15) and the Old First Ward (May 22), while returning to fitting favorites such as the Buffalo & Erie County Naval & Military Park on Memorial Day (May 29).

Now formally a program of GObike Buffalo and presented by Independent Health, Slow Roll Buffalo has become by far the largest offshoot in the global Slow Roll network whose home base is Detroit, where thousands have been gathering for Monday rides for many years. Other cities include Cleveland, Chicago, Minneapolis, Washington D.C, Berlin and Stockholm. Both the leisurely pace and dedicated squad of volunteers enable a safe and social scene in which riders ages 4 to 94 enjoy the sights and sounds around the streets of the city, meeting community stakeholders at multiple stops and ultimately ending at new and/or lesser-known destinations. The full schedule of host venues will be announced later this month.

“Slow Roll serves as an example and extension of Buffalo’s increases in bicycling and bicycle infrastructure, while welcoming riders of all kinds to connect with our city in new ways,” said Slow Roll Buffalo co-founder Seamus Gallivan. “We’re amazed at the bonds we have built to date and excited to expand every aspect of our operation, from our ever-diversifying ridership to our ever-evolving community outreach.”

Be sure to complete out one-time, season-long registration. More information is available at www.slowrollbuffalo.org.