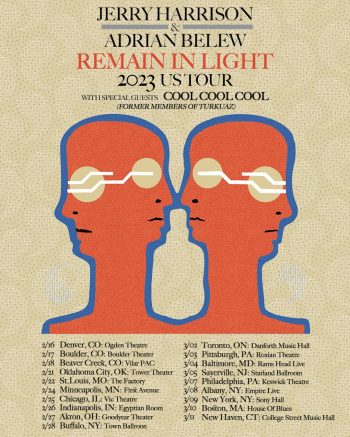 The Remain In Light tour is coming to Buffalo!

On the heels of their performance at LA’s The Wiltern last month, original Talking Heads member Jerry Harrison and noted touring member Adrian Belew have announced that they will bring their popular ‘Remain In Light’ concert on the road this winter, in celebration of the band’s iconic 1980 record. Kicking off in Denver on Feb. 16 before winding its way through the Midwest and east coast, the 19-date tour will find Harrison and Belew performing songs from this monumental period of the band’s history alongside a powerhouse band, including former members of Turkuaz, Julie Slick on bass, and Yahuba Garcia-Torres on percussion. To purchase tickets visit remaininlight.net.

“’Remain In Light’ is a high point in my career,” comments Harrison. “Adrian and I had often discussed the magic of the 1980 tour and the sheer joy it brought to audiences. It is such a delight to see that joy once again in the audiences on the current tour.”

“A joyful show of Talking Heads songs you know and love performed by a hot, 11-piece ensemble including Jerry and me,” Belew adds. “You can’t help but dance and go home with a happy smile on your face.”

Harrison and Belew first reunited to perform material from ‘Remain In Light’ at the 2021 Peach Music Festival with Turkuaz. Coming on the heels of the 40th anniversary of the release of ‘Remain In Light,’ it marked Harrison’s first live performance since 1996. The band then reunited at LA’s The Wiltern last month for a celebrated performance, which began with Harrison and Belew in conversation with Tawny Newsome, in a discussion about the Talking Heads’ incredible rise to fame and the impact they had on music and pop culture. Listen to Harrison and Belew discuss their careers on the “WTF with Marc Maron” Podcast.

The 2023 ‘Remain In Light’ tour will include an opening set by Cool Cool Cool, featuring former members of Turkuaz.

They Might Be Giants to visit the Town Ballroom