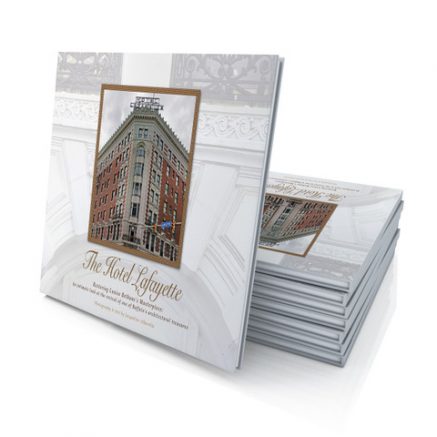 A West Seneca resident, Albarella will share her experience from 6 to 8 p.m. May 11 at the Buffalo History Museum.

Ten years ago this summer, developer Rocco Termini brought one of Buffalo’s grandest historic beauties back to life. At its height of greatness, the Hotel Lafayette was considered one of the 15 finest hotels in the country.

Originally planned to greet visitors to Buffalo’s Pan-American Exposition, the red brick and white terra cotta French Renaissance-style building boasted seven stories of rooms with hot and cold water in all bathrooms and telephones in all rooms. Financial problems delayed its opening until 1904.

This proud edifice, once considered “the best that science, art and experience can offer for the comfort of the traveling public,” boasts notoriety for a second reason.

Louise Blanchard Bethune, The Hotel Lafayette’s designer, was the first female professional architect in the country. She was also the first female member of the American Institute of Architects and the first woman to be made a Fellow of the A.I.A.

The $43 million restoration, undertaken by hundreds of highly skilled craftspeople, artists and contractors using many of the Old World techniques used in the original construction, was a painstaking and patient labor of love to restore each breathtaking architectural detail, from restoring crystal chandeliers in the ballroom to recasting ornate plaster beams.

Buffalo’s award-winning photographer and documentary maker, Jackie Albarella, followed the restoration process from the beginning and captured every minute detail in photographs and video.

Her on-site filming, interviews with craftspeople and historical research was assembled into an engaging film and stunning book titled The Hotel Lafayette: Restoring Louise Bethune’s Masterpiece.

A West Seneca resident, Albarella will share her experience following this landmark from 6 to 8 p.m. May 11 at the Buffalo History Museum, 1 Museum Court, Buffalo. Her images and video clips dramatically capture the energy and excitement surrounding this momentous rebirth of one of Buffalo’s true landmarks, The Hotel Lafayette. There is no pre-registration and the event is pay what you wish.

Be the first to comment on "Ten years later: The Hotel Lafayette — Restoring Louise Bethune’s Masterpiece"