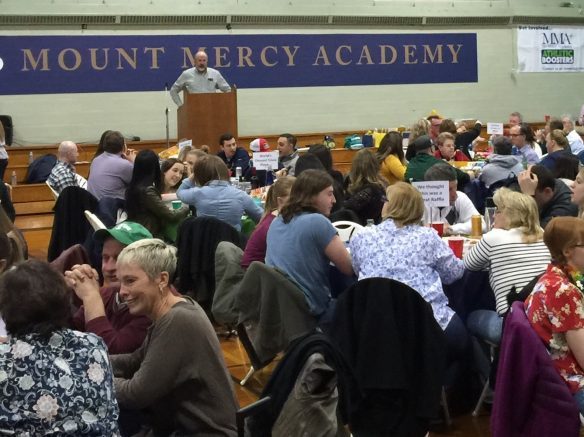 For the past three years, the Mount Mercy Academy Athletic Booster Club has hosted a Trivia Night at the school to benefit the athletic program. The events have sold out all three years and are a fun night for all who attend. The evenings would not have been possible without the hard work and dedication of the husband and wife team of Kim Crowley Browne and Gary Browne of Orchard Park.

The Browne’s interest in trivia nights began after attending a trivia night for the Chamber of Commerce in East Aurora. They had so much fun that night and began to think about running their own trivia night as a fundraiser. The pair added a few unique touches to make their trivia nights more fun for the participants such as Mulligans and hints.

As they began their trivia night preparation, a great deal of planning and committee work ensued. As the years progressed, the two have streamlined the process with the support of a few dedicated individuals. Now the process is fairly easy, with the exception of organizing, collecting and preparing the questions.

The collection of the questions is a closely guarded secret, but Gary does collect questions all year long, from sources such as newspapers, magazines, Jeopardy and trivia books. Kim stated that anything you may see posted at any time or place could become a question.

Mount Mercy is grateful and appreciative of all the hard work that Kim and Gary put into Trivia Night. Mount Mercy Academy President Margaret M. Cronin stated, “Gary and Kim are the engines of our Trivia Night. They work the entire year to put together the questions with a delicate balance of challenge and fun. On the night of the event, Gary serves as Master of Ceremony as Kim is overseeing all the behind-the-scenes activities such as scoring. They are one of the nicest couples I have ever had the pleasure to work with. As we like to say, ‘They are good people.’ How blessed we are they have chosen Mount Mercy to be the recipient of their talents and generosity.”