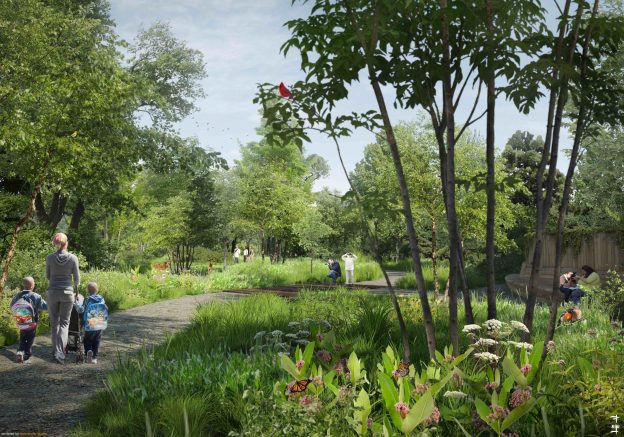 The Riverline is part of the Land Conservancy’s efforts to reimagine the former DL&W rail corridor running from Canalside to the Buffalo River.

The Western New York Land Conservancy has named Jeff Lebsack of Buffalo as The Riverline director. The hire follows a nationwide search to fill the new position for the planned nature trail and greenway near downtown Buffalo. With more than 30 years of experience in community-based engineering, design and planning, most recently as a senior project manager at Mott MacDonald, Lebsack brings a wealth of experience to the job.

The Riverline, part of the Land Conservancy’s efforts to reimagine the former DL&W rail corridor running from Canalside to the Buffalo River, is a one-and-a-half-mile greenway that crosses through the Old First Ward, Perry and Valley neighborhoods. Lebsack joins The Riverline at a pivotal moment in its development. In July, the Land Conservancy and its award-winning design partners W Architecture, Hood Design Studio and Green Shield Ecology, presented their concept designs for The Riverline. The concept designs were the result of four years of public engagement, as well as community feedback from initial concept designs and first drafts. The Riverline will require the type of long-term planning that Lebsack is uniquely qualified for.

After earning his BS in Civil Engineering from the University of Pittsburgh in 1991, Lebsack worked for the Genesee Transportation Council in Rochester where he engaged with residents and local agencies to plan and fund such notable projects as the Genesee Valley Greenway and the Lehigh Valley Trail. Over the past 10 years he has planned, designed and completed projects including The Riverway in Niagara Falls State Park and North Union Street in Olean that have revitalized communities, restored waterfront access, enhanced the environment and encouraged active public use.

He will be responsible for a similar role with The Riverline. Once it is built, The Riverline will be a vibrant, safe and welcoming space for people of all ages, abilities and backgrounds to connect with each other, nature and the waterfront. It will be an inspiring community gathering place alive with the history and voice of the surrounding Old First Ward, Perry and Valley neighborhoods, with walking, bicycling and winter activities like snowshoeing and sledding. It will connect to parks and kayak launches along the Buffalo River, and it will connect to trails that go to Canalside and the Outer Harbor, as well as the Larkin District and beyond. By transforming the unused railroad corridor, owned by the Niagara Frontier Transportation Authority (NFTA), the project will provide a model for how to connect people to nature right in the heart of the city.

Lebsack is eager to see the project move forward. “As an avid cyclist and hiker,” he said, “I have explored The Riverline corridor numerous times and I’m always awestruck by the amazing juxtaposition of this natural corridor within an industrial landscape. I am particularly excited about the opportunity to use a diverse, inclusive, equitable and collaborative process with the adjoining neighborhoods and stakeholders to stimulate the revitalization of an urban transportation asset, protect the environment and connect surrounding communities to nature and each other.”

Nancy Smith, executive director of the Land Conservancy, said, “From its initial conception more than four years ago, The Riverline has been a labor of love for the Land Conservancy, an opportunity to build an equitable and inspiring refuge that connects people with nature. With his experience planning, developing and completing large and bold infrastructure reuse projects, Jeff Lebsack is the perfect fit. We couldn’t be more thrilled to welcome him aboard.”

Congressman Brian Higgins has been steadfast in his belief in The Riverline. “Nancy Smith and the Land Conservancy, along with many community partners and funders, have created a vision for Buffalo that is bold and necessary,” he said. “The Riverline will honor the industrial heritage of our great city while bringing people back to the waterfront. Jeff Lebsack is a fantastic addition to The Riverline team, and I’m eager to roll up my sleeves and get to work with him to keep the momentum going strong.”

Senator Tim Kennedy, who has also been unwavering in his support, said, “I applaud the Land Conservancy team for making the inspired choice to hire Jeff Lebsack to lead The Riverline. Jeff’s knowledge, experience and dedication to large, community-driven development projects will be an incredible asset as this highly anticipated project moves forward.”

If you are interested in learning more about this project, or donating to create The Riverline, please visit the new website for The Riverline: theriverline.com. You can also reach out to the Land Conservancy at (716) 687-1225 or info@wnylc.org.