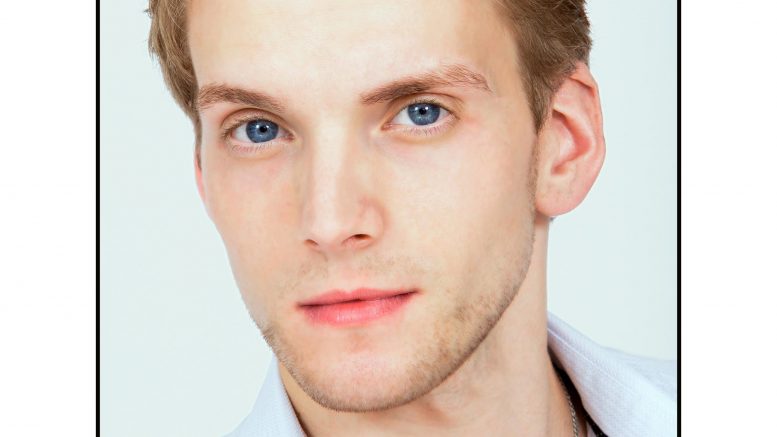 Shea’s Performing Arts Center is excited to bring the Tony Award-winning musical An American in Paris to Buffalo during the show’s first national tour. The production – about an American soldier, a mysterious French girl and an indomitable European city, each yearning for a new beginning in the aftermath of war – is performed by a talented cast including University at Buffalo graduate Christopher Howard.

“I left UB feeling very well-rounded to take on a career in music theater,” said Howard, who is originally from Ballston Lake, a few hours east of Buffalo. He grew up singing in chorus, taking voice lessons, competing with NYSSMA, and performing in the New York State All-State Choir and the All-Eastern Chorus. He took music theater classes and private lessons at a local dance studio in Schenectady and decided to go for his BFA in music theater and a BA in dance when he went to college in Buffalo.

“As Broadway musicals become more and more complex, casting directors and choreographers expect you to be able to do everything – dance, sing, do ballet, tap, juggle, speak in accents, ride unicycles,” Howard said. “Having earned degrees in both music theater and dance at UB, I felt like I went to New York City with an extensive knowledge of many styles of dance, vocal technique, acting technique and a wealth of information on the more academic side of the business including proper dance terminology, song repertoire, and theater and dance history.”

His time in Buffalo allowed him to observe and appreciate all the City of Good Neighbors has available for performing artists including professional theater companies, dance schools, performance opportunities, art and music.

“I love sharing with people that Buffalo has such a strong theater and dance community,” Howard said. “It’s so unexpected from a town in Western New York, but the town has so much to offer.”

Howard – who after graduating from UB attended the Joffrey Ballet School in New York City on full scholarship, danced on Celebrity Cruise Lines, performed at Dayton Ballet and in the touring companies for A Chorus Line (international tour, Japan), Billy Elliot (U.S. tour) and The Phantom of the Opera (U.S. tour) – said Buffalo is a town that has much more to offer for the culture of New York State than people would usually expect and how it continues to grow.

He came upon an audition for An American in Paris while in San Francisco for the tour of The Phantom of the Opera. Due to scheduling conflicts, Howard wasn’t able to attend the men’s audition, but the casting directors allowed him to audition early and dance with the women prior to being asked to stay to sing and read from the script.

“I then traveled back to New York City on two separate occasions on my own dime to go to callbacks for the company,” Howard said. “The day after the final callback, I heard from the casting director that they were prepared to make me an offer for the U.S. tour.”

An American in Paris closed on Broadway in October. The national tour is the first and only company in the world putting on the show until it opens on the West End in London in early 2017.

Howard wears many hats in the musical: a swing (a universal ensemble understudy), dance captain (in charge of all of the dance aspects of this very dance-heavy show) and understudy to one of the principal roles (Henri Baurel). He accepted his role in the show because he knew it would be a challenging one that would push him further as a dancer, singer and actor.

“This show is an incredible challenge from all aspects of music theater,” Howard said. The dancing, choreographed by Tony Award winner Christopher Wheeldon, is “incredibly challenging and stylistic” and features many different styles of dance including ballet, tap and jazz. “Singing George Gershwin’s music is a joy but also presents its own challenges. And with the show taking place in Paris, we have accents to master.”

Howard is one of the lucky ones, working consistently since graduating UB. “Many actors and dancers, even the most talented ones, don’t work on a regular basis so I’m grateful that I’ve been able to work consistently for the past five years with quality, challenging shows.”

He hopes to continue performing as time goes on in many different venues and disciplines, and is considering teaching some day. “I often guest teach and lead master classes around the country,” he said. “Perhaps I’ll get a graduate degree and teach at a university or run a company or school sometime in the distant future.”

Though he is not currently learning on a campus, he is learning new lessons on a daily basis with the work he’s involved in. The self-described perfectionist said his career is difficult and can cause you to look down on yourself as a performer.

“We have to remember why we are in this business and why it makes us happy,” he said about performers. “Of course the work is absolutely necessary for individual success, but it’s also necessary to enjoy the experience, the growth and the opportunities to share your art with thousands of people night after night.”

What keeps Howard going is that “never give up” outlook on life. “It sounds cliché but it’s absolutely true,” he said.

“If I would have given up every time this business knocked me down, I’d have been in another career path long ago. Working as an actor, singer and dancer is definitely not for the thin-skinned. It won’t always be easy, but if you’re willing to put in the work, the time and the effort, even when things seem dire, it will undoubtedly pay off.”

An American in Paris will be at Shea’s from Nov. 8-13. Tickets are available at the Shea’s box office as well as on Ticketmaster’s website.