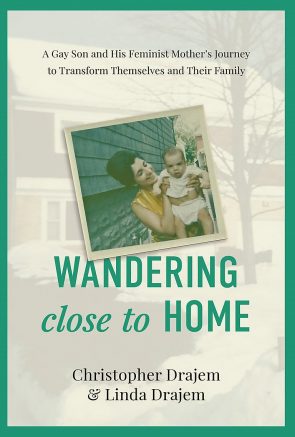 Wandering Close to Home is the latest release from Buffalo-based NFB Publishing.

Wandering Close to Home by authors Linda and Christopher Drajem is the latest release from Buffalo-based NFB Publishing.

Linda Drajem grew up in Buffalo in the 1950s, the oldest child in a Catholic working-class family. She married her high school sweetheart, became pregnant and watched from the sidelines as women burned their bras and demanded equal rights. But the role of a stay-at-home mom wasn’t as fulfilling as she was led to believe it would be.

Her second son, Christopher, was born in 1968, one year before the Stonewall riots kick-started the modern gay rights movement. He attended Catholic schools, served as an altar boy at mass on Sundays, and had a secret that he was sure would send him to hell for all eternity: He was gay. This book charts the path Christopher and Linda traveled as they realized that the life they were born into just didn’t quite fit. It maps the tentative steps taken by both mother and son to move away from societal, religious and family expectations. Along the way there was challenge and heartache, joy and celebration, and the thrill and exhaustion of parenting. At the end of the day, they forged a path that brought personal satisfaction, a uniquely modern family and all the comfort of home.

Linda Drajem is a retired teacher. She taught high school English for over 25 years. After a late-life Ph.D. from the University of Buffalo, she taught for nine years in the English Education Department at Buffalo State College. As a member of a long-standing writing group, Women of the Crooked Circle, she continues to write. She has been published in The Buffalo News and literary journals. In addition, she has published a collection of poetry, Arrows of Time, and another, InnerSessions, with dear friends and poets Barbara Faust and Kathy Shoemaker.

A teacher at heart, she is a docent at the Burchfield Penney Art Center and a presenter on literary topics at local senior centers. She and her husband Bob live in Buffalo but often visit their sons, one on each coast. She loves the opportunity to be with her four grandchildren.

Christopher Drajem has been out to his parents since March 1994. He met Patrick Sexton, the love of his life, in 1997, and married him on board a decommissioned Washington State ferry in August 2001. In 2003 they adopted a daughter, Isabella, and in 2007 a son, Jordan. In January 2012, Patrick and Christopher were legally married in the state of Washington. They often travel to Buffalo and Long Island to visit family and friends.

Christopher has remained involved with the adoption agency that facilitated their children’s adoptions. In 2008, he teamed up with another adoptive parent to provide quarterly training for LGBTQ individuals and couples who are in the process of adopting. He has presented numerous workshops on LGBTQ inclusive curriculum in schools and is a proud member of the Bellevue-Eastside PFLAG. Christopher currently teaches high school English in Bellevue, Washington.

Plummet and Shine is latest release from NFB Publishing

NFB Publishing releases The Adventures of Sticky McGooey and Friends