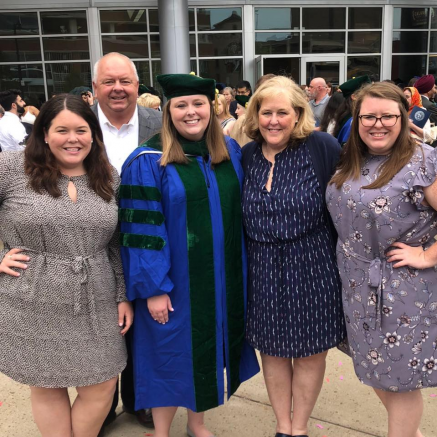 Kelly Hess, the daughter of Jack and Kathy Hess of West Seneca and a 2012 graduate of Mount Mercy Academy, has completed both her undergraduate and medical school education in seven years. Hess is currently doing her three-year residency in pediatrics in Springfield, MA at Baystate Medical Center.

During the 2010-11 school year Mount Mercy Academy established a partnership with Mercy Hospital and Catholic Health to offer its students a unique career experience.  As members of the Academy of Science and Health Care (ASHC), students have the opportunity to gain exposure to many medical fields as well as the chance to interact with professionals in the field of their choice. Hess was a member of the first class that had the opportunity to do rotations and an internship in the ASHC.

“Being able to get hands-on experience so early on in my education helped me to reaffirm that the medical profession was right for me. With there being so many years of schooling, it was so reassuring to know that all the hard work was worth it,” Hess noted.

Although she always had an interest in science, Hess cannot point to a particular moment that led to her career choice. “I never had the “aha” moment of when I decided I wanted to be a physician. When I was a freshman at Mount Mercy I really enjoyed my biology course and my love for science developed from there,” Hess remarked. “Also, my eldest cousin is a physician and she was someone I always looked up to, so she was definitely a large influence in my decision.”

“Being a part of the Science and Health Care Academy at Mount Mercy helped me realize at an early age that I wanted a career in healthcare. Knowing so early that I wanted to become a physician allowed me to become involved in an accelerated, early acceptance program through LECOM. Because of this, I applied to the program during my senior year at Mount Mercy and was provisionally accepted to LECOM while still in high school,” Hess explained. “The acceptance was based on my SAT scores and high school GPA. I interviewed at LECOM during November of my freshman year of college and was able to have a seat held for me if I kept up my undergraduate GPA and got a certain MCAT score. I then matriculated into LECOM following my junior year of college. Had I not been part of the Science and Healthcare Academy at Mount Mercy I may not have discovered my passion for healthcare when I did.”

Hess is a DO and not an MD, but some do not realize that there is no significant difference in her education or qualifications. An MD practices more traditional medicine while osteopathy emphasizes the role of the musculoskeletal system in illness and disease, yet still incorporates drugs and surgery as valid treatments.  Osteopathy focuses more on treating the body, mind and spirit. Both disciplines attend four years of medical school and complete their training in the same residency programs. Doctors take the same tests for certification, regardless of their designation as an MD or DO.

During her third and fourth year of medical school Hess completed clinical clerkships.  Most of her clerkships during her third year were spent at St. Vincent Hospital in Erie, PA. However, Hess did a few elective rotations at Sisters of Charity Hospital, Niagara Falls Memorial Medical Center, a pediatric office in Columbus, OH, and a primary care office in Orchard Park.

Hess believes that receiving the opportunity ASHC provides to network with different members of the healthcare team was very beneficial. “During my medical school rotations I ran into a hospital executive while rotating at Sisters of Charity Hospital.  She remembered me from my time rotating through labor and delivery at Mercy and put in a good word for me with my supervising physician,” Hess commented.

Hess has the following advice for anyone who is considering a career in medicine. “Try to get involved in healthcare as early as you can. Not only does it look fantastic on a resume and is a great way to network, but it allows you to see firsthand what your career could look like,” she advised. “Also, please know that if you want to become a physician, you can do it! The path to becoming a physician is lengthy and difficult but with dedication and a great support system you are totally capable.”

Mount Mercy Academy is the only school for young women to offer this partnership and is one of just a few in Western New York to allow its students to gain invaluable, practical and hands-on-experience in the medical profession while still in high school.