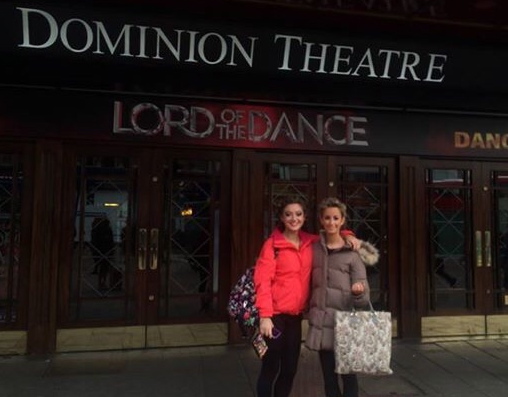 What would you do if your idol offered you your dream job? Chances are you would accept the opportunity in a heartbeat.

“He has transformed traditional Irish dance into a worldwide phenomenon. His talent is incredible,” Lynch said.

Flatley created the worldwide phenomenons “Riverdance” and “Lord of the Dance,” and he broke the world record for the most tap sounds in one second … then broke the record again. Topping it off, his legs are insured at about $40 million.

It’s easy to assume many Irish dancers want to follow in Flatley’s professional footsteps. For Lynch and Dargan, Irish dance training began before they started elementary school when their parents enrolled them at Rince na Tiarna School of Irish Dance in South Buffalo, under the direction of Mary Kay Heneghan.

“Both girls were very hard working and had lots of fun at class,” said Heneghan, who later gave the opportunity to the girls to attend Irish dance competitions. After doing well locally, regionally and nationally, the girls scored well enough to advance to the world championships multiple times. Lynch placed as high as 11th in the world, with Dargan taking home the top prize.

“Both have had amazing achievements in competitive dance along with some disappointments that didn’t cause them to give up, but rather work harder,” Heneghan noted.

“Mary Kay has been so much more than a dance teacher to me,” Lynch said. “She never gave up on me and always taught me to persevere.”

This perseverance caught the attention of “Lord of the Dance” casting agents. Though both of the Williamsville natives were enrolled in college at the time — Dargan at Brockport State and Lynch at the University of Delaware — they decided to go after their dance dreams.

Videos and resumes were sent to the casting agents in October showcasing the girl’s talents and accomplishments. In January, they were invited to audition for the show in London, England.

“We learned the steps of the show and were evaluated to see how well we were able to perform the choreography,” Lynch explained. The show’s cast was announced three weeks later.

Being on the other side of the ocean, Heneghan was anxiously waiting to hear the outcome.

“The girls tried to Facetime me from London and my phone was acting up so I couldn’t answer,” Heneghan said. “We then tried to Skype, but their internet signal was not strong enough.”

Finally the girls texted her. They were two of 40 dancers asked to be in the show. “I cried,” said Heneghan, “and then I called my mom and cried again.”

“The happiest moment of my life was being able to call my parents and tell them that I had made the show,” Lynch said. “We had put so much into my dancing for many years, and it was the most rewarding feeling ever.”

Adding to their dream come true, Lynch and Dargan had the chance to dance with Flatley, who they said is wonderful to work with. “He is so encouraging and inspiring,” Lynch said. “It has been such an honor to be able to dance with him.”

Their first show took place right before St. Patrick’s Day at the Dominion Theatre. At the end of the show, the sold-out crowd gave them a standing ovation.

“This experience has meant the world to me. It has taught me to dream big as dreams do come true,” Lynch said. “I am so thankful for everyone who has helped me achieve my goal.”

“I’m thrilled two girls who are so passionate about Irish dance get to make a career out of it,” Heneghan added. “They are great role models and this is the perfect reward for two great girls.”

Lauren Kirchmyer is the entertainment reporter for BuffaloScoop.com. If you have a story idea, please email her at lkirchmyer@gmail.com.