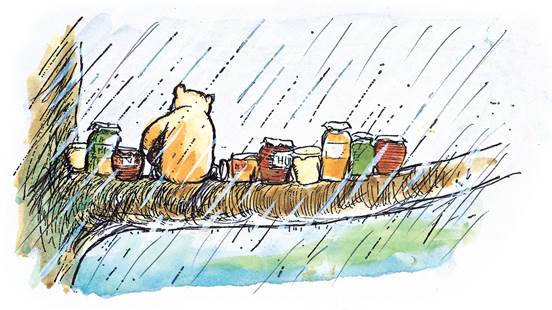 Pooh sitting on his branch … beside him, ten pots of honey. Winnie-the-Pooh chapter 9, line block print. Line illustrations copyright © E. H. Shepard. Colouring of the illustrations copyright © 1970 and 1973 E. H. Shepard and Egmont UK Limited. Reproduced with permission from Curtis Brown Group Ltd on behalf of The Shepard Trust. From the Egmont UK Ltd Collection held at University of Surrey, Ref No. EGM/1/74

The Royal Ontario Museum (ROM) in nearby Toronto will be the exclusive Canadian venue for Winnie-the-Pooh: Exploring a Classic, an exhibition celebrating the magical world of one of the most adored literary characters of all time. On view at the ROM from March 7 to Aug. 3, 2020, and organized by the Victoria and Albert Museum, London (V&A), the exhibition will explore the origins, creation and enduring legacy of the classic stories by A.A. Milne (1882–1956) and illustrations by E.H. Shepard (1879–1976).

“We are delighted to present Winnie-the-Pooh: Exploring a Classic at the ROM, showcasing the playful side of art, culture and nature,” says Josh Basseches, ROM Director & CEO. “This exhibition will not only capture the imaginations of our young visitors but will enchant entire generations of families who grew up with Winnie-the-Pooh and his friends. The ROM presentation spotlights an internationally significant piece of Canadian history, revealing the historical context of Winnie-the-Pooh’s rise to fame and helping to deepen our understanding of the character’s Canadian roots and his enduring legacy.”

Winnie-the-Pooh: Exploring a Classic examines the real people, relationships and inspirations behind the character and its imaginary world. Visitors will gain new insight into Milne and Shepard’s creative collaboration, highlighting Milne’s unique storytelling style, his clever use of language, and Shepard’s iconic illustrations. In addition, visitors will be reminded of the many valuable life lessons in the Winnie-the-Pooh books, which have stood the test of time with families around the world.

This is an exhibition that has a special place in Canada. Winnie-the-Pooh’s Canadian story starts with Harry Colebourn, a Canadian veterinarian who purchased a female black bear cub from a trapper in White River, Ontario, naming her “Winnie” after his hometown of Winnipeg. Colebourn brought Winnie with him to England at the beginning of the first World War. When he was deployed to France, Colebourn left Winnie in the care of the London Zoo, eventually donating her after the war. It was here that a young Christopher Robin Milne became so enamored of Winnie that he named his favorite teddy bear after her and obliged his father to take him for repeated visits to see her. Inspired by his son’s love of Winnie, A.A. Milne introduced the Winnie-the-Pooh character to readers in his collection of poems When We Were Very Young (1924), and later in his most acclaimed work, Winnie-the-Pooh (1926).

The collection is primarily drawn from the V&A, The Walt Disney Company, Egmont Publishing, The Shepard Trust and The University of Surrey. More than 200 works in the exhibition span 90 years of Winnie-the-Pooh history, from 1920 to the present. The objects include original illustrations, letters and proofs along with early editions, photographs, cartoons, ceramics and fashion—all featuring the much-loved character and his friends: Christopher Robin, Eeyore, Kanga, Roo, Owl, Piglet, Rabbit and Tigger.

Key works will include:

• More than 80 of Shepard’s original pencil/pen-and-ink drawings for the four Pooh books, including some of the best-known illustrations.

• Memorabilia from 90 years of Pooh history, including ca. 1930 plush toys, a Pooh Lego set and prints from the Pooh satire “Wookiee the Chew.”

• A handwritten 1926 letter from Milne to Shepard and photographs of the Milne family.

Winnie-the-Pooh: Exploring a Classic is a separately ticketed exhibition. See rom.on.ca for admission hours and pricing.

Natural and supernatural worlds will collide at the ROM

Be the first to comment on "Winnie-the-Pooh: Exploring a Classic makes its debut at the ROM"