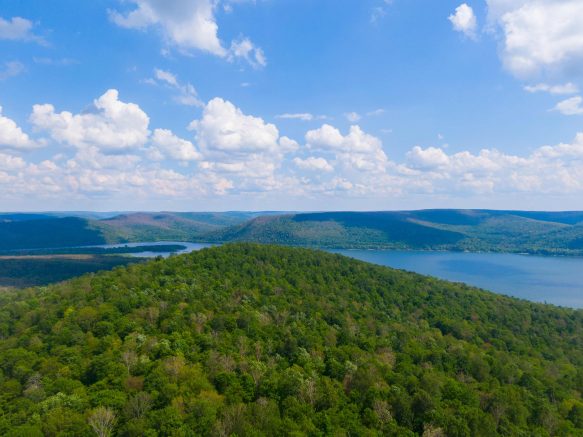 The Western New York Land Conservancy and the Friends of the Allegany Wildlands are working to save the Allegany Wildlands in 2021. This remarkable 200-acre forest, located only a few hundred feet from the Allegheny Reservoir near Allegany State Park, is home to a spectacular diversity of plants and animals. The community has until the end of this year to reach its fundraising goal of $879,000. Thankfully, it is more than halfway there. The community still needs to raise $330,000 to meet its fundraising goal. Thanks to three generous challenge gifts, the next $120,000 in donations will be matched 1:1. Once the goal is met, the Land Conservancy will purchase the land and keep it open as a publicly accessible nature preserve forever.

To kick off the final fundraising push of the campaign, the Land Conservancy will host a free virtual event on Oct. 27 featuring Ed Marx of the Wildlands Network. Attendees will also hear from Jajean Rose-Burney, Deputy Executive Director of the Land Conservancy, about how they can save the Allegany Wildlands.

An Evening with Ed Marx of the Wildlands Network
When: Oct. 27, 2021, 7 to 8 p.m.
Where: YouTube
Register online at wnylc.org/events

The public is encouraged to attend this free event, but anyone who wishes to watch must register at the Land Conservancy’s website, WNYLC.ORG. Prior to the event, all registrants will receive a link to watch it on YouTube. Although the event is free, registrants are encouraged to donate to save the Allegany Wildlands.

During the last ice age, the glaciers never covered the Allegany Wildlands, keeping intact an ancient plant community. As recently as 150 years ago, the forest teemed with massive American Chestnut trees, which had dominated eastern forests for 40 million years, but were wiped out by a blight. Incredibly, six American Chestnuts more than 40-feet tall still survive at the Allegany Wildlands, some of which are producing seeds. Large oaks, a threatened lily called a White Clintonia, and rare orchids also grow here. Underneath the forest canopy, black bears and bobcats roam the ridges and ravines. Majestic Bald Eagles soar overhead, colorful songbirds nest in the tall trees, and playful river otters search for fish in the nearby reservoir.

In the early 1800s, the property was purchased by the Sluga family. Generations of their family have been its stewards ever since. Though the Sluga family has decided to sell their land, for the next chapter of this forest’s story, they want it protected. Protecting the Allegany Wildlands represents the first act of the Land Conservancy’s ambitious, decades-long project it’s calling the Western New York Wildway. The Wildway will be a connected corridor of protected lands that stretches from the vast forests of northern Pennsylvania to the Great Lakes, through to the Finger Lakes, the Adirondacks, and beyond. It will form part of the Eastern Wildway which runs all the way from Canada to the Gulf of Mexico. The Wildway will allow plants and animals to migrate across the land as they once did, it will allow those that have disappeared from our region to return home, and it will allow those in need to move around to new homes as climate changes. The Allegany Wildlands is already connected to 7,000 acres of protected state land, nestled between Allegany State Park and South Valley State Forest, and it is a significant link in this future Western New York Wildway.

But the Allegany Wildlands is also threatened. If the Land Conservancy community cannot meet its fundraising goal by Dec. 31, 2021, it could be logged and developed.

To help educate our community about the broad impact saving forests like the Allegany Wildlands has on the larger Eastern Wildway, the Land Conservancy is partnering for this event with Ed Marx, Northeast Wildlands Ambassador for the Wildlands Network. “One of the greatest threats we face in the 21st century is a loss of biodiversity,” says Marx. “If we continue to lose valuable habitat for our most vulnerable species, we will cause irreparable damage to our world. The Eastern Wildway seeks to address this challenge head on, and we’re thrilled that the Land Conservancy is joining us in our effort to create a large-scale habitat corridor running up and down the east coast. The Allegany Wildlands is an important piece of that effort.”

“In our work saving land in Western New York we are continually reminded of the important role forests play in our natural world,” says Nancy Smith, executive director of the Land Conservancy. “They filter and absorb rainwater, they provide beauty and recreational opportunities, and of course they are home to countless plants and animals. The Allegany Wildlands provides all of these things, and more. As part of our planned Western New York Wildway, it will help our region address the very real impact that climate change is having on our environment.”

If you would like to donate to save the Allegany Wildlands, you can donate online at wnylc.org or send a check made payable to “Western New York Land Conservancy” to P.O. Box 471, East Aurora, N.Y. 14052. Please call or email if you have questions: (716) 687-1225 or info@wnylc.org.

Land Conservancy to host talk about the salamanders’ big night