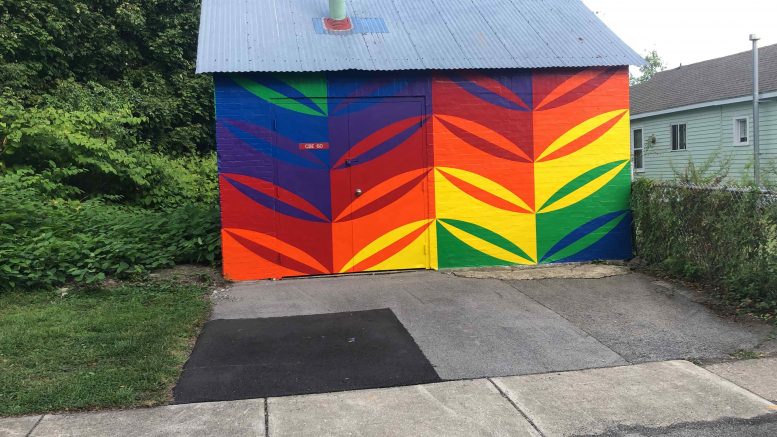 Students from the Old First Ward Community Center’s arts program conceived and painted a mural for the National Fuel building adjacent to the future home of The Riverline.

This spring and summer, under the tutelage of Buffalo-based artist Christopher Kameck, students from the Old First Ward Community Center’s arts program conceived and painted a mural for the National Fuel building adjacent to the future home of The Riverline. That mural, located at the intersection of Mackinaw and Alabama streets in the Old First Ward, is now complete and was publicly unveiled at a press conference on Aug. 26.

The mural project, one of a suite of community events sponsored by BlueCross BlueShield of Western New York’s Blue Fund, is part of the Land Conservancy’s efforts to reimagine the former DL&W rail corridor running from Canalside to the Buffalo River, the 1.5-mile greenway that crosses through the Old First Ward, Perry and Valley neighborhoods.

For the students who created the mural, the project was a transformative one in a year of upheaval and social unrest — and it provided them with an important means of self-expression. “I truly hope this mural will start some positive conversations and leave you thinking,” said Jordan Johnson, one of the students in the program. “Through this project, it felt like we could bring some peace in a time with a lot of hate, and let our community enjoy a bit of love.”

Nancy Smith, executive director or the Land Conservancy, said of the mural: “It is the perfect embodiment of The Riverline — our future ribbon of green that will connect Canalside with the Buffalo River just as it connects the Old First Ward, Perry and Valley neighborhoods. On The Riverline, people of every race, sexual orientation and ability will be welcomed. We are so grateful for the creativity and persistence these students demonstrated to make the mural and today’s ribbon-cutting possible.”

In addition to the mural, the Land Conservancy is pleased to announce that W Architecture and Landscape Architecture has been selected as the design firm that will lead the Concept and Schematic Design phase of The Riverline over the next year. A woman-owned business founded in Brooklyn by Barbara Wilks in 1999, W Architecture specializes in reimagining urban spaces by integrating natural systems to help communities unlock their potential for positive change. This results in more resilient communities which connect people to place and places to natural systems. They have assembled a team of firms that will work together in this design phase, including Hood Design Studio, a minority-owned business founded by MacArthur Genius Grant recipient Walter Hood, and urban ecologist Steven Handel.

W Architecture is excited to begin their work, and their team views The Riverline as a potential model for the future of landscape design. “The Riverline is a linear landscape that highlights and enmeshes remnants of Buffalo’s pre- and post-industrial landscape,” said Barbara Wilks. “The enormous scale of the industrial landscape, the intimacy of the Buffalo River and the scale of the surrounding communities, the monumental downtown, and the vastness of Lake Erie, all are part of the story of the changing relationships of people to their waters. Since it is situated in a place rich with heritage, natural resources and a diverse public, The Riverline should not be homogeneous and tidy, a continuation of the Olmsted tradition, but rather idiosyncratic and diverse. It will feel at once remote and accessible, a part of nature yet urban in its mix of people and uses.”

Funding for the Concept and Schematic Design phase comes in part through an Environmental Protection Fund grant administered by the New York State Office of Parks, Recreation and Historic Preservation. Additional funding is provided by KeyBank in partnership with the First Niagara Foundation, BlueCross BlueShield of Western New York’s Blue Fund, and individual community donors. The Land Conservancy continues to seek additional funding for The Riverline.

“Community is built through connections,” said Congressman Brian Higgins. “When we walk alongside one another we grow in understanding of the world beyond our own. We commend the work of the student artists and look forward to advancing The Riverline as a place that connects our neighborhoods and our waterfront and a destination that brings people together.”

“This incredible new mural is one of many projects currently underway that are designed to enhance the Old First Ward, by both preserving our neighborhood’s history and creating a new foundation through innovations such as The Riverline,” said Senator Tim Kennedy. “I applaud the Land Conservancy for continuing to move this important vision forward, and thank Christopher Kameck and the students at the Old First Ward Community Center for bringing this impressive public art to life.”

“This mural created by these young people is a perfect example of the importance and the power of public art,” said Majority Leader Crystal Peoples-Stokes. “In addition to helping to transform The Riverline connecting Canalside with the Buffalo River, it also celebrates our LGBTQ Pride and the diversity of our community. Hats off to the Western New York Land Conservancy for its continued hard work in preserving our community’s historic beauty for generations to come.”

“At its core, the Riverline is about connecting communities and creating a vibrant public space that all can enjoy,” said Assemblyman Pat Burke. “This project is hopefully the first of many of its kind we will see on and along The Riverline. The students of the OFW Community Center designing a mural honoring the LGBTQ community is a great example of how the young people in our neighborhoods share this vision and truly care about creating a healthier and more welcoming future.”

“I am thrilled to congratulate the Old First Ward Community Center youth members, and their artist and mentor, Chris Kameck, for their completion of the mural at the corner of Alabama and Mackinaw streets!” said Council member Mitch Nowakowski. “Community-driven art has the power to boost our neighborhoods, instill pride in our city, and provide a valuable learning experience for youth. By teaming up with the Western New York Land Conservancy and corporate support from BlueCross BlueShield of Western New York’s Blue Fund and National Fuel, we are all that much closer to re-imagining the former DL&W rail corridor which runs through the Fillmore District. Together we can and we will revitalize our neighborhoods to create a modern, sustainable Buffalo.”

If you are interested in learning more about this project, please visit the new website for The Riverline at theriverline.com. You can also reach out to the Land Conservancy at (716) 687-1225 or info@wnylc.org.