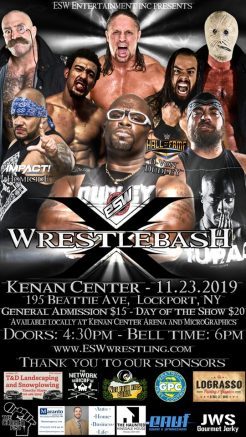 Wrestlebash will feature a video game tournament prior to bell time.

For the first time in three years, Empire State Wrestling (ESW) returns to the Kenan Center, 195 Beattie Avenue, Lockport, for its biggest event of the year, “Wrestlebash,” on Saturday, Nov. 23.

ESW is owned by Lockport resident Brett Stymus. He promoted his first event in Lockport in 2008 and, over the years, featured many wrestling legends like “Superfly” Jimmy Snuka, Kevin Nash and Brutus “The Barber” Beefcake on his Kenan Center events. Locally based wrestlers such as Jonny Puma, Will Calrissian, Pepper Parks and Kevin Bennett were also on these shows.

As many as 1,000 fans attended prior Kenan Center events. Considering it has been several years since the last Kenan Center show, the higher marquee names being booked, ESW’s rising profile locally and abroad plus the special attraction matches in-place, a significant amount of fans are anticipated to be in attendance for Wrestlebash. Wrestlebash will feature the following:

• World Wrestling Entertainment (WWE) Hall of Famer D-Von Dudley will make his ESW debut. Dudley is best known as half of one of the most decorated tag teams in professional wrestling history – The Dudley Boys.

• The seventh annual Ilio DiPaolo Memorial Cup match will be held. The match will feature six wrestlers with the winner receiving the DiPaolo Cup, named in honor of one of Western New York’s most famous wrestlers, Ilio DiPaolo. The winner will earn a chance to challenge for the ESW Heavyweight Championship at any time of their choosing. The match’s participants include the following: Current Evolve tag team champion A.R. Fox; previous DiPaolo Cup winner “Big Time” Bill Collier; last year’s DiPaolo Cup winner, “The Patron Saint of Professional Wrestling” Brandon Thurston; Cleveland, Ohio-based Atticus Cogar; Puf, a member of the “Buffalo Brothers” group; and the winner of the “Last Chance” battle royal to be held at the beginning of Wrestlebash.

• A “War Games” match will be held between ESW’s “The Empire” faction against the promotion’s younger stars. The two teams will battle inside a roofed cage with a wrestler entering the match at a set interval. The Empire’s team will consist of four former ESW Heavyweight Champions Jonny Puma, Will Calrissian, Chris Cooper and Kevin Grace. The other team will consist of viral star Anthony Gaines, James Sayga, Vince Valor and “The Remix” Kevin Bennett.

• Former Impact Wrestling stars Homicide and Eddie Kingston will team to face “The Butcher & The Blade” (Pepper Parks and Every Time I Die guitarist  Andy Williams).

Front and second row tickets are sold out. General admission tickets are $15 pre-sale and $20 on event day. Doors open at 4 p.m., with bell time set for 6 p.m. Wrestlebash will be recorded for ESW’s live streaming outlets.

Wrestlebash will feature a video game tournament prior to bell time. Participants can enter the tournament for $50. Attendees will also be able to visit a variety of vendor tables from local businesses.